3 bedrooms, kitchen and a sim? Living in a metaversal neighbourhood

I must admit that this sounds terribly nerdy, but I found myself entertaining myself with an idea of a family sim (i.e. simulator, that is an area in a virtual world or a mini virtual world). I was a bit lazy and didn't start to play with OpenSim configuration files to make it use MySQL instead of the default SQLite, and because the SQLite default does not seem to work out of the box on the latest versions of OpenSim on Mac, I decided that the older 0.6.8 version would do fine at least for the time being. But, in the end after a 60 minutes or so I had a nice home virtual world (VW) running on my home server. Then I could plant some nice trees, load few things there and take a nice snapshot of my new me under a couple of cypresses (in the photo). 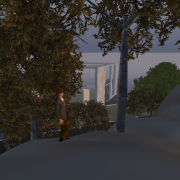 Ok, but to the point. I have to say, I don't really know at the moment what I will do in practice with my own little HomeVW. No, I am not going to make avatars for all family members and instead of dining together, suggest that we might hang out in our own little virtual world logged in from different rooms. Ok, if I decide to make it accessible from the Internet, we might do this if some of us is not at home or if we would like to invite our friends to a virtual visit. That would probably make much more sense.

But I would say that the idea of having a flat of 3 bedrooms, kitchen, bathroom and a sim(ulator) is rather thrilling. We have some space at the physical home, but the home would also expand to the metaverse and we might have some additional rooms and spaces in the virtual world. We might meet each other at home while being away, meet friends and if the whole thing would be connected to a grid and hypergrid, we would have an entire virtual neighbourhood and metaversum. The neighbours might be the same we have in the physical world, but they could be equally well people from all over the world. We could be neighbours with our friends from the places we have lived before, and from other places we might wish were a little bit closer.

This type of a neighbourhood and the consequent possibilities to create and sustain communities would probably be some kind of an ultimate form of virtual replacements of local communities discussed by Coleman. Same time they might be an antidote to the tendency to bowl alone. It would be possible to move (physically) and stay virtually, or move virtually and stay physically in one place. At the same time the convergence of physical and virtual neighbourhoods would create an interesting hybrid kind of 'glocal' information ecology that might be at the same time anchored in both physical and virtual localities. A metaversal neighbourhood would also have more specific (both geographical, in virtual/physical senses, and purely social) coordinates than the type of glocalism that relies on a network of separate connections in different chat services, microblogging streams, social networks and discussion forums.

So, get a server, install OpenSim (or some other installable virtual world), create yourself a new garden and a few more rooms and start to think about your metaversal neighbourhood. Yes, and of course you can rent those extra rooms from some service provider if you like that better. But, you have to admit that the idea of an own server running a HomeVW sounds more fun and interesting. 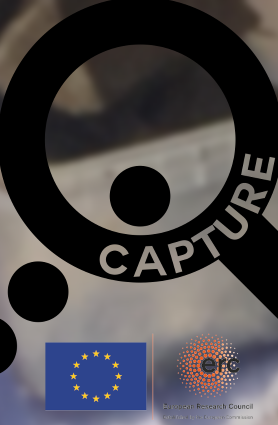